If you have ever seen Back to the Future, you have most likely obsessed over the hoverboard that Marty Mcfly uses as transportation throughout the series. Well, your dreams are coming true with the new Maglev trains that hover above the track. Maglev is short for “magnetically levitating trains” which means that the train levitates using magnetic forces. All magnets have two poles: a north pole and a south pole. Like poles attract, and opposite poles repel. German Maglev trains work by utilizing the attraction of opposite poles of a magnet. There are massive electromagnets underneath the track that are connected to the actual train. These electromagnets are solenoids which are coils of wires that act as magnets when a current is running through them. These trains switch the current on and off very fast, so the train is attracted to the metal track. As it is attracted upward, the train itself is lifted about 10mm above the track. There are also magnets in the sides to keep the train steady. There is a separate system of magnets that propel the train forward. It is a propulsion system run by alternating current. The poles of the magnets attached to the train are attracted and repelled by the electromagnets in the track. These trains can run up to about 430 km per hour. 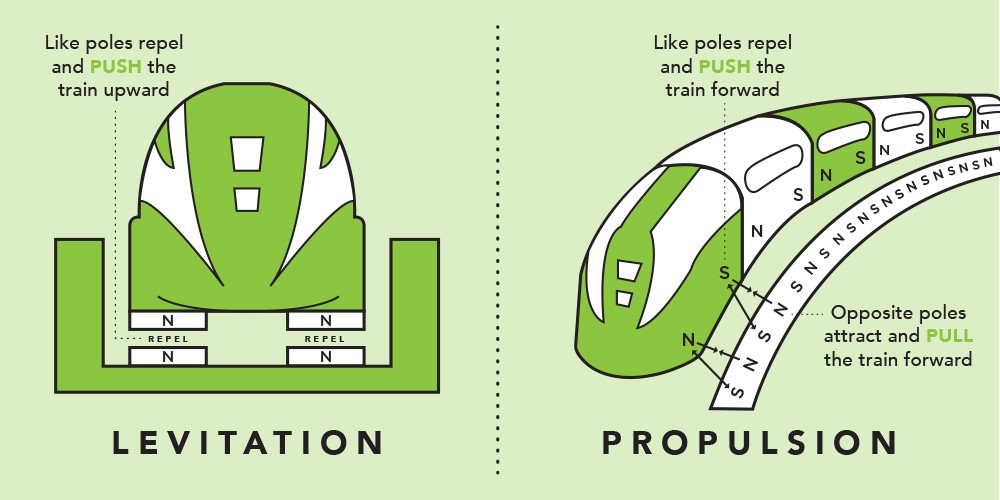 These trains have many benefits in society. There are no overhead power cables because the powersource is built into the track. They do not have a standard engine, so there is no use of fossil fuels, and they are extremely efficient because you only need to switch on the part of the track that the train is running over. The train is also safer. No two trains travelling along the same route could ever catch up to each other and crash because they are all powered to move at the same speed. There are also no derailings because the further the train gets from its normal position between the guideway walls, the stronger the magnetic force will act to move it back into place. There is also less turbulence because the only thing in the way is air. However, although the trains are faster, more efficient, and better for the environment, they are also extremely expensive. Therefore, in order to make the cost worth the benefit, the trains would have to become much faster. This is possible with the addition of vacuum tunnels built for the train to run through. These would eliminate air resistance and allow the trains to get up to speeds around three-and-a-half thousand kilometers per hour. A trip from London to Tokyo would only take three-and-a-half hours.